Why Stafi Protocol Is Revolutionary 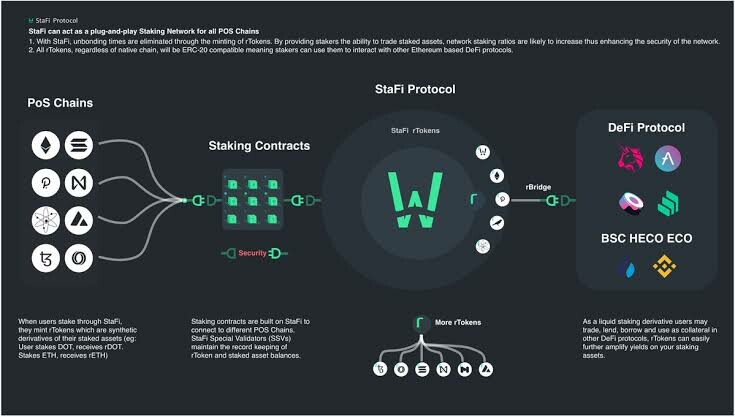 The dominance enjoyed by PoW has slowly waned and for good reasons: its computation-dependent mechanics is energy inefficient.Clearly, this model doesn’t work for digital networks looking to get more people operating nodes, which puts the decentralization of these projects at risk.

With PoW out of the picture for most projects, PoS is the next best option.By requiring token holders to stake their tokens to ensure the security and decentralization of the network, something better can be done than relying on power-hungry gadgets, as with PoW.

Despite the suddenly fancied nature of PoS, it’s not blemish-free.Digital assets must be locked up if they are staked, which might present a problem for those who want to use them before long.Previous attempts to solve this challenge creates more undesired issues, until Stafi protocol became a thing.

To understand how Stafi works, a little background history on the protocol will help.

Stafi Protocol has a multi-layer structure and each layer brings something different to the table.

The bottom layer forms the basis of the protocol – made possible by Substrate's chain – and serves as the anchor for all the many capabilities of Stafi.

At the center of Stafi’s protocol is its contract layer.Here's where the magic occurs.It’s through this layer that users can add their tokens to the staking pool, with the transfer of rTokens also happening within this layer.

The Application layer offers an insight into Stafi’s thoughtfulness, especially as it concerns the exchange of rTokens. Through this layer, third-party applications are built for the transacting of rTokens.

PoS-reliant blockchains now have the opportunity to unlock liquidity without jeopardizing the safety of their framework.This is possible because of the Stafi Protocol.But there’s a lot that goes on behind the scenes to make this happen.

Stafi works just like a browser plugin, allowing users to stake tokens on connected chains while getting rTokens as flexible receipts of deposit.Utilizing multi-signature addresses for asset transfers to staking contracts with the collection of rTkens eliminates the security risk that is often associated with getting a third-party platform involved in this transaction.

The decentralized nature of Stafi Protocol is most conspicuous in its use of independent validators called the special Stafi validators.Stafi tracks the original asset, and the value of its rTokens matches that original asset.It’s a complicated process that ensures unauthorized persons aren’t allowed access to rTokens or staked assets.

The Role Of Stafi's FIS

Unlike the rTokens, the FIS is the native token of Stafi Protocol.The orchestration of protocols relies on its operation.Special validators on Stafi Protocol have to stake FIS tokens to be shortlisted for such a sensitive task.This isn't a surprise, since these validators are essential to the protocol's effectiveness.So by necessitating validators being stakeholders – staking FIS tokens – they are less likely to renegade on their duties. There’s also the implication of slashed staked FIS tokens should validators falter in their duties.

How Safe Is The Stafi’s Staking Contract?

With Stafi in the picture, there’s bound to be some uncertainty regarding the safety of staked assets.It isn’t just Stafi who bears the risk.The security of the assets is handled by the original chain, but the protocol's multi-signature address is often at the center of distrust.The validators are simply picked by algorithms and there is no collusion among them.

Stafi Protocol looks to be the future of PoS blockchains.By unleashing the full potential of the protocol, any problems of locked liquidity disappear.And this is actualized without ruining the decentralized principles of the connected chains.

You can read up more about Stafi by visiting their website here: https://m.stafi.io/

The text on this page is based on the original post and does not claim the copyright of the owner in any way. Everything written here is a free interpretation of the original post.
3/25/2021
Blockchain News
Recent Posts